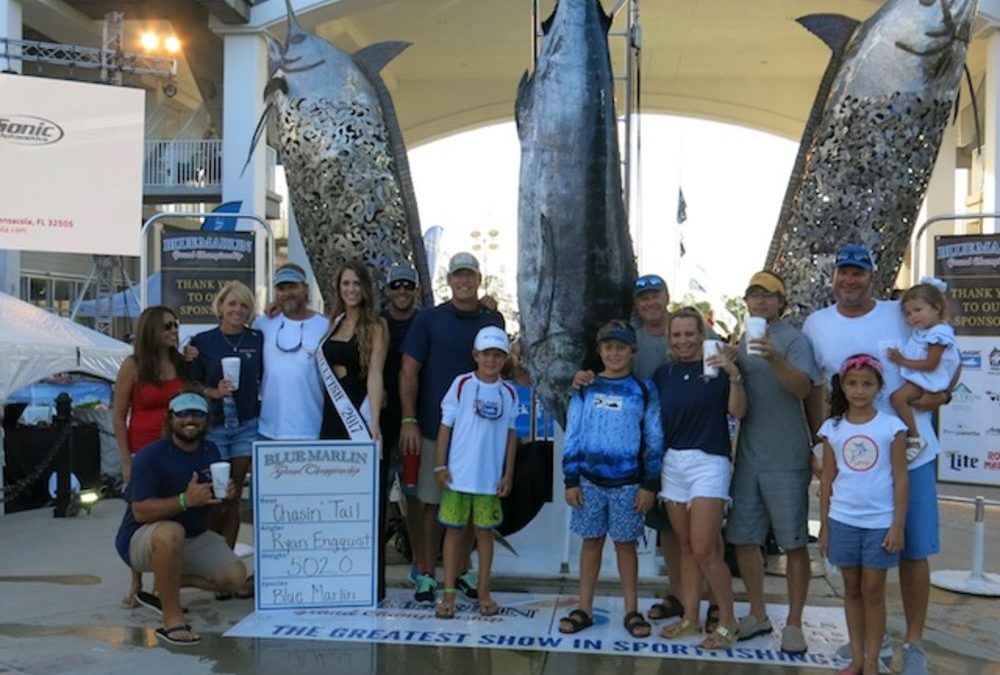 The chase turned into the catch of the week as Chasin’ Tail, an 80-foot Weaver owned by Ryan Engquist of Baton Rouge, Louisiana and his veteran team were crowned the winners of the 2017 Blue Marlin Grand Championship. Capt. Clayt James, mates Ruston Rood, Parker Rodrique and the family/friends crew brought a 502.0-pound blue to the scales Saturday night to top the field of 63 other competitors. As a result, Chasin’ Tail won $460,845, a sizable chunk of the record $1.55 million overall purse.

“To me, this is the best tournament in the Gulf,” Engquist says. “It’s like the Super Bowl of big-game fishing. If you’re going to win one, this is it and to say the entire crew is excited is a big understatement.”

Another previous Triple Crown Champion, Done Deal, finished second in releases with three blues to its credit, thanks to the performance of the top lady angler, Katie Gonsoulin, daughter of owner Jon Gonsoulin. With optionals, Done Deal won $149,445 for the week. Capt. Jason Buck runs the 70-foot Viking.

Three other blues were weighed that exceeded the new 106-inch minimum length re-quirement. Bonner Williams and his team mates aboard Rascal, a 63 Hatteras GT owned by Harris Morrissette and run by Capt. Nick Milsap recorded a 466.4-pound fish. That catch was worth $12,690. Fourteen-year-old Ryan Cooper, competing aboard CE, had a remarkable run offshore. In addition to weighing a 437.6-pound blue, he also released a Grand Slam (another blue, white marlin and sailfish) in 20 minutes and boated a 28.2-pound dolphin. Combined with dad Scott Cooper’s 28-pound bull, Team CE won $104,310 for its fourth place finish and jackpot entries. Capt. George Crenshaw is the skipper of the 65-foot Hatteras. Ryan was named the top Junior Angler for 2017.

Owner/angler Michael Hobbs, fishing on Gotta Believe, a 60 Miller with Capt. Trey Wise at the helm, recorded the last weighed marlin. The 422.6-pounder was worth $74,880.

Quick Time, a 70 Viking run by Capt. Shelby Johnson, was the third-place Release Team, with 1202 points. Those efforts were good for a $68,130 check. A total of 28 blues, 17 white marlin and 3 sailfish were released by the tournament fleet and verified by the video judges. Blue marlin scored 501 points apiece in the hybrid scoring format.

Jason Benton, owner of Don’t Blink, a 56 Viking run by Capt. Skip McAllister, was the top rod in the tuna division. He and his team earned $67,500 for a 173.6-pound yellow-fin. Traders Hill and lady angler Marshall Powell was second (160 pounds/$48,150), while Zack Fisher on Jacquelyn was third (147.2/$4,590). Other boats earning tuna payouts include Aldente, Rising Sons, Sea Spray and Team Supreme.

Casey Carter on Buckshott (Capt. Hunter Junek/45 Cabo) caught the top wahoo, a 49.4 fish worth $20,250. Rachael Wilkinson on Sweet Liberty II was second with her 44.4-pounder, and Ralph Morrison on Relentless Pursuit rounded out the field with a wahoo that tipped the scales at 40.6 pounds. Pipe Dream and Iona Louise also won wahoo jackpot money.

Jason Davis on Get Reel, a 60-foot Hatteras with skipper Sonny Alawine at the controls, wound in the largest dolphin at 30.4 pounds. Add in team mate Todd Davis’ 21.4-bull and Get Reel is taking home a check worth $74,700. CE locked down the other two spots while Team Supreme added a jackpot bonus.

“Another Grand Championship is in the books,” Tournament Director Scott Burt said. “Some quality fish were brought to the scales and we also showed releasing blue marlin can earn big payouts too. This tournament is a great showcase for the tremendous fishery and outstanding talent that’s here along the Gulf Coast. Thanks to all our special teams for joining us and to our many, many generous sponsors, including our host The Wharf, who make it all happen.”